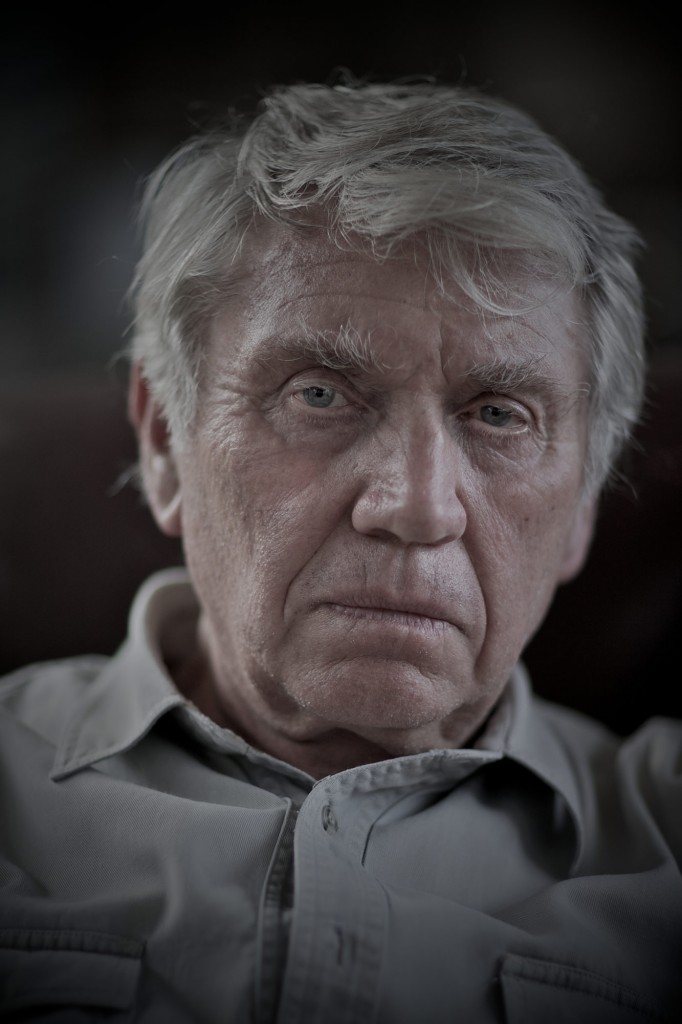 Having learned how to use a camera in the Royal Air Force, McCullin’s photographic break came early in his career, when his pictures of a street gang, later linked with the murder of a policeman, were published in the Observer newspaper.

This led quickly to assignments and his imagery projecting the realities of war, the lives of the dispossessed, the poor and the victims of corrupt politics found their way into the homes of those who were safe, reading their Sunday papers.

He is recognised for these images, taken most notably, in Cyprus, The Congo, Vietnam, Cambodia, Beirut, Northern Ireland, El Salvador, Afghanistan, Biafra, Bangladesh and Uganda, and for his work at home, on the underclass of British society, his haunting landscapes and darkly luminous still-lifes.

He has experienced, injury, imprisonment and real danger.

He has spent a lifetime using his wits to survive and his instinct for being in the right place at the right time in order to document a story.

He is extremely charismatic and speaks with an honesty and eloquence about his life and the conflict he has seen, that is both educational as well as entertaining.

There is a fascination about his life, and at 85 years of age he is not only still involved with areas of conflict but also with his haunting studies of the Somerset landscape, where he lives and other projects, such as his published work on the architecture of the fringes of the Roman Empire.

His has been a life full of danger, action and survival, at the same time creating the greatest of visual images, recording events from the middle of the 20th century right up to today.

He was Knighted in 2017 for his services to photography but could just as well have received the honour for his service of constantly telling the truth.

He once said that, “when human beings are suffering, they tend to look up, as if hoping for salvation. And that’s when I press the button.”

Don Mccullin reports to RAF Cardington at the start of national service. After completing basic training at Wilmslow, he is deployed as a photographic assistant to RAF Benson, Oxfordshire, sorting Second World War aerial reconnaissance films. Volunteers for oversea service.

Don McCullin is demobilised and returns to work at W.M. Larkin Cartoon Studios as a darkroom assistant.

Don McCullin pawns his Rolleicord camera which is subsequently redeemed by his mother.

Following the murder of a policeman by a London gang member, Don McCullin offers his photograph of The Guvʼnors to the Observer picture editor, Cliff Hopkinson, who commissions further photographs.

Don McCullin travels to Berlin (without assignment) to cover construction of Berlin wall. Photographs published by the Observer.

Don McCullin travels to north of England during the harsh winter where he completes his first major photographic essay on the steelworkers of West Hartlepool.

Don McCullin leaves the Observer to become freelance photojournalist for the Sunday Times.

Covers the Vietnam war (the first of 15 trips to Vietnam) for the Illustrated London.

Assignments include Beirut and Berlin

Assignments include Mujaheddin in Afghanistan

Assignments include Siege of Beirut and Christian Phalange massacre of Palestinians

Assignments include Kurdish Rebellion in Iraq

Retrospective exhibition at The Barbican, London

Assignments include covering the HIV/Aids epidemic in Sub-Saharan Africa

Assignments include invasion of Iraq

Assignments include Darfur refugees from Sudan

A two hour documentary about his life and work premiered

The documentary about his life and work receives two BAFTA nominations

Major retrospective at the National Gallery Of Canada in Ontario

Begins his landmark publishing project entitled “Irreconcilable Truths”. A three volume, 1,300 page retrospective featuring over 700 photographs, many of which have never been published before. Limited to 1000 copies

Knighted for services to photography